I love cuddling! I want to cuddle my friends! (but some of them don't want cuddles so I won't cuddle them) (and some of them aren't within cuddling distance)

Trigonometry? In your cuddles? It's more likely than you think!

Recently, a session of virtual cuddling led to a hidden trigonometry problem! dun dun dun
If a person is leaning on another person, how far will the person have to move their head to give the other person a little kiss on the cheek? Of course this depends on the angle of the leaning and the heights of the people and we need to use math!

To prevent such math from being needed during cuddling, perhaps cuddlers should precalculate some cuddly constants :p

Cuddle-related images which I use in text-based communication; perhaps you will too. 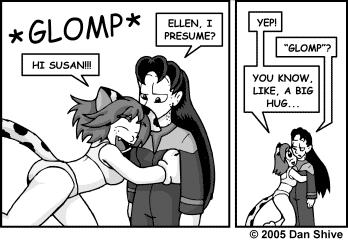 Good for introducing the concept of a glomp. From El Goonish Shive. 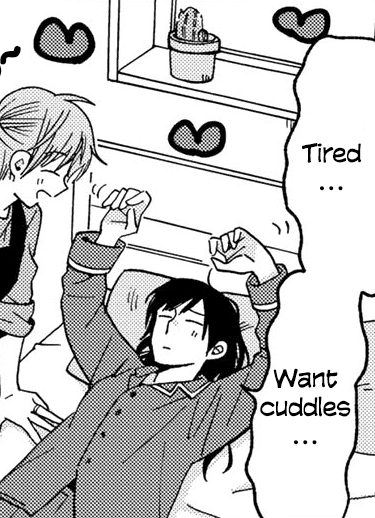 I found the song A Cup of Coffee, A Sandwich, and You (1925); I think it's a nice cuddly song.
Here's the lyrics, and you can download the melody (MIDI, not made by me):

In the movie plays of nowadays
a romance always must begin in June;
tales in magazines have all their scenes
of love laid in a garden 'neath the moon,
but I don't miss
that kind of bliss;
what I want is this:
A cup of coffee, a sandwich, and you,
a cozy corner, a table for two,
a chance to whisper, and cuddle, and coo,
with lots of hugging and kissing in view.
I don't need music, lobster, or wine
whenever your eyes look into mine.
The things I long for are simple and few:
a cup of coffee, a sandwich, and you.

(I don't actually drink coffee, nor frequently eat sandwiches, nor experience romantic attraction, but i like the affection & the sentiment)